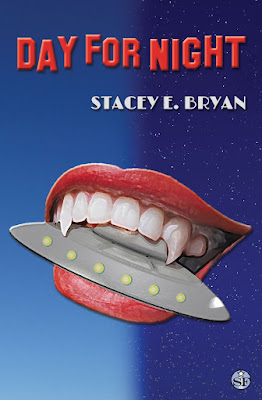 My sincere thanks to Roxanne for hosting me on my first virtual blog tour ever!

Part of the reason I was drawn to this site is because I love the description of Roxanne given on the “about” page:  Story strumpet, tome loving tart, eccentric night owl...

Who in their right mind would not want to be a story strumpet or tome loving tart? And forget eccentric night owl! I think the last time I was up early in the morning, I was ten years old, going on a fishing trip with my cousin and my uncle in Palo Alto, California. I still remember trying to push the hook through the worm and the way it jerked and squirmed. My uncle assured me that the worm couldn’t feel it. Which made no sense at all.  Because then why was it jerking and squirming like that?

It’s funny to think about my reaction to the worm’s either real or phantom pain, because one then has to wonder: what is so attractive to us about vampires? If most people are like me, and I assume they are, nobody wants to hurt another living creature. No one wants to see fear or pain in someone’s eyes. And yet so many of us are drawn to those super-powerful, immortal, often cruel creatures of the night, vampires, like they’re the rock stars of the paranormal world and we’re the groupies that can’t stop following them, no matter how badly we’re treated.

In the end, it must be the paranormal factor that takes the edge off. The fact that they could exist, but they most likely, in all probability, do not exist. When I’m reading, I find that I enjoy improbability more than in-your-face reality. I had to work up the nerve for many months to read “The Lovely Bones,” which, although it contains some “second reality” elements like a girl in heaven, its main thrust concerns a very earth-bound, everyday monster: a serial killer. When I think back to all the things I did as a girl that age, getting into the cars of neighbors I knew but didn’t know all that well, walking around alone in the San Fernando Valley, which seemed so safe, but was obviously no safer than anywhere else…I shudder in retrospect. So reading about a girl whose neighbor—neighbor!—a man who lives in her neighborhood, whom she knows, and what he does to her….it made my skin crawl in a way that even vampires can’t do. In fact, my skin’s crawling right now as I write this.

When I wrote my novel Day for Night, I wanted to get into the vampire thing like nobody’s business. But I wanted to have fun with it. I wanted to be as far away from The Lovely Bones as was humanly possible. I loved Anne Rice’s “Interview”, but I also found it more interesting to see the story of how Louis became a vampire. Origin stories are fascinating to me. So I wanted to take an ordinary person, tip-toe behind her as she went about her daily business, then suddenly grab her and heave her into the air…and watch her reactions from there. Not to be mean or anything. But it’s a way to poke the worm without actually harming the worm, isn’t it? ‘Cause it’s fiction, and it’s a story. And thus it begins…

In Day for Night, the main character Rae’s troubles actually start not with vampires but with witnessing an alien abduction in broad daylight. Rae is modeled after myself in many ways except that I’ve never been an actress or, in her case, a wannabe actress. But I have been BFFs with denial, and I’ve been known to have a raunchy vocabulary now and again. As a mixed race chick who’s getting older under the shadow of the Hollywood sign, Rae’s got a lot of problems to deal with, but nothing prepares her for how paranormal the world actually is. I mean, who would be prepared? Just when Rae is almost ready to begin accepting the idea of aliens abducting people, vampires invade her life without so much as a “Howdy do.” And the worst part about it? The vampires know all about the aliens already!

So, yeah, I don’t want to see worms squirming on hooks, even if it’s some kind of automatic response. With the undead, one doesn’t have to be worried about such things, which is what makes them so attractive. And who knows? Maybe some vampiric bad boy ne’er-do-wells will even have some advice on how to deal with little gray alien interlopers.

What more could us story strumpets and tome loving tarts ask for, after all? 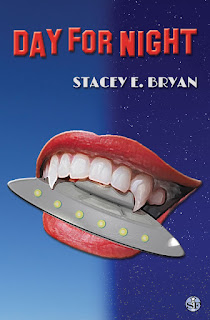 When reality TV star Rae Miller is kicked unceremoniously to the curb by her back-stabbing cast mates, she quickly realizes that revenge fantasies and unemployment are the least of her problems after she witnesses an alien abduction in broad daylight. Worse, after escaping a terrifying almost-abduction herself, Rae succumbs to a sexy Nosferatu’s silky assurances, becoming undead in order to up her alien Ultimate Fighting skills.

Life is hard as a 38-to-40-something aspiring actress in L.A.

Stacey was raised in the San Fernando Valley but born in San Francisco, where she left part of her heart. She has worked on a dude ranch, coached gymnastics, and captions for the hearing impaired. Her work has appeared in several literary magazines in New York and L.A., including Ginosko and The Rag. She is currently working on the sequel to her novel Day for Night. She lives in “beautiful downtown Burbank,” as Johnny Carson used to say, with her husband who is also a writer.